On this day back in the year 2000, a dream became reality as SAVAGE RADIO was born!  Nearly six years after leaving terrestrial radio as an on-air dj, I was ready to start my own journey.  My passion for rock n roll and radio came together as the internet broadcast began. I was one of the founding broadcasters with LIVE365 which featured a limited playlist streamed from the company website.  Things got sidetracked for about a year and a half when licensing rates went sky high, LIVE365 went out of business, the stream jumped to Radionomy for a year and then went dark for about 4 months. New owners came in and re-launched LIVE365 in February 2017 which is where the station is based now. These days, SAVAGE RADIO streams live from the ANIMAL STUDIO computer 24/7 and boasts a playlist unmatched by other stations. I am humbled by the fact that people listen from all over the world.  Even so, the surface has barely been scratched with listening time averaging between 1,200 to 1,500 hours per month. Still, these are amazing numbers with next to no promotion. Today as we celebrate Independence Day in the USA, I also celebrate 20 years of rockin' the web with SAVAGE RADIO! Looking to bigger things over the next 20 with name recognition, more listeners and plenty of great rock n roll! Thank you for taking the time to indulge me and for your listening patronage. If you could, please spread the word and KEEP ROCKIN'!

A brand new music update has just been completed to kick off the month of June! It includes hot new cuts from VOLBEAT, REDLIGHT KING, TESLA, RIVAL SONS, L.A. GUNS & many more. Check out the complete list of Active Rotation adds on the MUSIC page of the web site. Click this link: http://savageradiorocks.weebly.com/music.html
November 25th, 2018

According to show creator Andrew 'The Axeman', Hair Metal Mansion is now on an indefinite hiatus. He has recently taken on a new job and needs to focus on that at the present time. We wish him all the best in his new role and would like to thank him for all the great shows he produced. If and when he gives the go ahead for more shows, the Hair Metal Mansion will be welcomed back to Savage Radio. Godspeed Andrew. 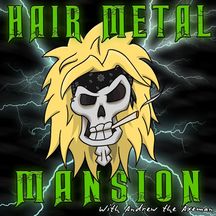 Starting Wednesday October 10th, Savage Radio is excited to bring you 'Hard, Heavy & Hair with Pariah Burke' to our lineup of shows! It features 2-hours of heart-pounding, guitar-crunching, throat-rending riffs in the best hard rock, heavy metal, and hair rock from the 70s, 80s, 90s, and all the way up to today. New show every week!  Welcome to the station Pariah!

Pariah Burke grew up banging his impressive head of hair to 80s and 90s hard rock, heavy metal, and hair band albums he played all the way through while wondering why even the coolest FM stations only ever played the singles. Living and playing in bands in Daytona Beach back when Bike Week was still awesome, Pariah developed a taste for Harleys and whiskey, and began DJing Bike Week events and mud wrestling. Later, somehow still in possession of his full hearing, Pariah embraced the ability of Internet radio to reach hard rock, heavy metal, and hair band fans all over the world. He started the Hard, Heavy & Hair with Pariah Burke syndicated radio show to bring to all those fans the biggest hits but even more so the non-single album tracks, the “deep cuts,” that make albums great but never get air play during regular radio rotation.
AIR TIMES:
WEDNESDAY NIGHTS @ 10PM ET
SUNDAY NIGHTS @ 6PM ET

The Hair Metal Mansion has been put on a short hiatus. Savage Radio will continue to air the show upon it's return. Here is the official statement from show host Andrew 'The Axeman':

"The Hair Metal Mansion Radio Show has been my 'baby', my labor of love for going on 10 years now. 574 shows in. I am eternally grateful for all of the people and opportunities it has brought in my life. They say once this music gets in your blood, it never leaves and that is very true. I still love it, but putting together a 2 hour show every week comes with a lot of work behind the scenes. I like to have some 'breathing time' and be able to enjoy the process without having to rush anything, and with having 2 'real' jobs now, that has become more difficult, and that is why you haven't seen me on air as frequently as I once was. It brings me to this point, to officially put the show on hiatus for the rest of the summer, not forever! I will be back and when I do, it will be all engines go. The Hair Metal Mansion Radio Show will return in the fall - in the meantime, you can listen to hundreds of past HMM Shows any time via podcast (mixcloud.com/andrewaxeman) and be sure to support the many great stations and networks that have carried HMM for all these years. I will be back, in the meantime, know how thankful I am for each and every one of you and your undying support over the years!"

April 12th, 2018
Noize In The Attic has made the jump to Thursday! The switch allows us to bring you the latest show sooner. It's 2 hours of hard rock and heavy metal, classic and new with Greg Schmitt. Now, every Thursday night at 10pm ET on SAVAGE RADIO.

***BREAKING STATION NEWS***
Hey rockers! A pack of new tunes have been added to the SAVAGE RADIO playlist with the latest music update. Songs by BLACK STONE CHERRY, STRYPER, GRETA VAN FLEET, BLACK ACES, DEAD DAISIES & more. See the complete list of tracks on the web site at http://savageradiorocks.weebly.com/music.html
and Thanks For Listening! http://player.live365.com/a68405
October 1st, 2017

****BREAKING STATION NEWS****
SAVAGE RADIO has a new presence on GAB! With big social media blocking free speech as well as letting the government and radical agenda's control them, we feel GAB is the platform that should be celebrated and promoted. We are very happy to pair with GAB. Let Freedom Ring and Rock Rule!

*****BREAKING STATION UPDATE*****
Statistics from the past 30 days show that Savage Radio had just over 3000 hours of listening time for the period. That is an all time record for the station! I'd like to thank everyone who listens to Savage Radio with so many choices out there. Keep Rockin'!

Hey everyone. I've got some more great SAVAGE RADIO news. The station stream is now available on iTunes! Just find the button in the top left corner of iTunes that says Music and click on it. Then click Edit menu. Check the Internet Radio box. Then go to the Internet Radio section. Open the Hard Rock / Metal folder. Scroll to find SAVAGE RADIO - The Rock N Roll Animal. Click and enjoy! Once you have Internet Radio on your iTunes menu, you can easily go to that section each time. Keep Rockin'.

I am pleased to announce that Savage Radio is now accessible through Tunein for the first time. Tunein is available on your desktop, mobile device with tunein app, as well as on Roku, Xbox One, Samsung TV and Sonos. Just search for Savage Radio once you fire up Tunein and you are good to go. Rock on everyone!

The apps are back! All the Savage Radio apps have now been updated to play the new Live365 station stream with song and album graphics. Check it out. And, if you don't have your app yet get it right here.
February 11th, 2017

Hey everyone. I just added a 'Use App' button to the Facebook page that lets you open the player window so you can listen to SAVAGE RADIO with just a couple of clicks from the page. It is not an app at all but was the best option I had since they do not let you call the button what you want. Please try it out and enjoy!
February 8th, 2017

Ok everyone. I have great news. As of 5pm today, SAVAGE RADIO is streaming live once again from Animal Studio on Live365! You can tune in right now at savageradiorocks.com . Once there just click on the Listen Now button. That opens the player window and then you click the Play button. Don't be confused by what song is showing in the window. What you see and what you hear will be two different things. It's baby steps everyone. Live365 will be getting everything straight as time goes on. SAVAGE RADIO is On The Air once again from the Animal computer. Crank it up and let's rock everyone!
January 26th, 2017

I just want to give everyone who cares an update on the station. I have been contacted by Live365 and they are putting the finishing touches on station activation.   So, Savage Radio will be one of the first stations on the new Live365 and should be rockin' again very soon! I am beyond excited to get back 'on the air'.    There will be a monthly fee involved to keep things going.    There is no other station like Savage Radio in the world and I cannot wait for everyone to hear it again. I know that many people in my age group have long abandoned rock music and that is a shame. Allot can be blamed on terrestrial stations only playing classic rock. The hope is to reach some of those people as well as younger generations. There is so much great new music out there and I look forward to bringing it to you. Initially, the station will keep with playing the music without talk. The only exceptions will be 'Hair Metal Mansion' and 'Noize In The Attic'. As time goes on, I would like to add my own show(s) to the mix. Also, there will be 4 minutes of commercials each hour. That means 56 minutes of rockin' every hour! So, within days you should be able to crank it up. It has been almost three months since going dark. So, I cannot wait to get things going again. Rock on!